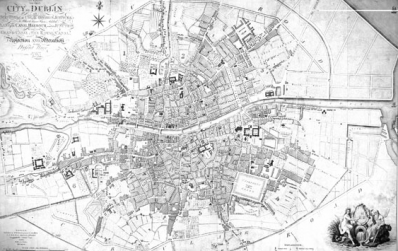 The recent announcement in budget 2014 extending the Living City initiative to Dublin coupled with the Dublin City Council report on South Dublin Georgian Core has combined to provide a renewed focus to these buildings.

Both initiatives are to be welcomed. However before discussing a new beginning it is important to understand the history.

Georgian Dublin a brief history
The Georgian era refers to a building construction period between 1742 and 1840 during the period of King George I to King George IV.

In today’s terms the key preeminent Georgian areas are the Georgian leading from Fitzwilliam Place and the three South Dublin Squares: St. Stephen’s Green, Merrion Square and Fitzwilliam Square. However, in the initial years of the Georgian era the Northside was the place to live.

This changed when the Earl of Kildare chose to move to a new large palace (Kildare House later named Leinster House) he caused shock as it was built on what was seen as the inferior Southside. However, all others of nobility followed suit.

Theses were homes for aristocrats, bishops and the wealthy even though many of the developments, particularly in Fitzwilliam Square, were smaller and less impressive than the original Georgian Buildings on the North Side. While the wealthier people lived in houses on the squares, those with lesser means and lesser titles lived in smaller, developments off the main squares, such as Upper and Lower Mount Street and Leeson Street. The advance of time, two world wars and Irish Independence lead to the slow decay of some of these buildings as the original occupiers vacated them. Over time residential use was replaced by commercial and office use.

The Living City Initiative
In more recent times particularly during the recent economic recession it was apparent that the vacancy and dereliction of these buildings could become a significant issue. The buildings are not really appropriate to modern office use and are too expensive to convert to residential use unless you are one of the few that has millions to spare for that endeavor. This is one of the reasons as to why the government introduced the Living City Initiative. While the initiative will target all buildings built up to 1914 its initial focus was intended for Georgian Houses. The key points are that it is a targeted pilot tax incentive, which aims to address the issue in two ways by focusing on:
• Encouraging people back to the centre of Irish cities to live in older buildings: and
• Encouraging the regeneration of central business districts.
The Initiative will provide tax incentives for works performed to refurbish residential and retail buildings either to bring them up to a habitable standard or to make improvements to buildings which are currently inhabited. The residential incentives will be targeted at owner/occupiers rather than property developers or the rental sector.
While this initiative is a welcome attempt to encourage focused expenditure on these unique and under utilised buildings in reality it does not go far enough. The incentive or capital allowances can only be reclaimed by occupiers using the property as principal private residence 10 years. The costs to carry out refurbishment will be beyond the financial capabilities of most and is unlikely to be the catalyst for the redevelopment that is the intent of the relief.

DCC Study on South Georgian Core
Dublin City Council commissioned a study of the South Georgian Core and the results of this study indicated a 20% vacancy rate. It is estimated that this vacancy rate may in fact be higher when one accounts for the significant underutilisation of many of the Georgian buildings in that the top floor or basement in many cases remain vacant while companies occupy the most efficient floors from ground to third.

A key recommendation of the South Georgian Core (SGC) study states:
“”The City Council should support as a priority the ongoing architectural research being undertaken by this study regarding “Fire Regulation” and residential sub-division … and broader national best practice guidance (Conservation, Fire and Disability Access) with respect to the practicalities of subdivision of Georgian buildings for residential use.”” (Recommendation 20)
The above extract best captures the major physical impediments to rejuvenation in that unless one accepts the buildings and the form of construction applied at the time of the original building then some form of compromise on the buildings will be required. It may be a compromise on modern development standards such as Disability Access Certificates (DAC)/Fire Safety or alternatively a relaxation of elements of historical building preservation.

Suggestions for expansion of the tax incentive to development and the ultimate planning gain for the city
While both of these initiatives at National and City level are welcome they are unlikely to offer any real change to the current majority use of Georgian Houses as offices. As apart from those whom have already purchased and converted Georgian Houses back to single occupancy residential use the new tax allowance coupled with some relaxation on building compliance matters will not be sufficient catalyst for significant ongoing rejuvenation. Georgian Houses reflected middle to upper class city living of its time with the professionals and aristocrats being the main owners and occupiers of 3,000 to 4,000sq ft.

houses. These houses had the benefits of servants working in the basement and living at the top of the house. However modern city living is not of that nature and it would be a terrible loss to the city if a study were not undertaken as to the feasibility of these buildings being converted to multifamily apartment living. With possibly the benefit of allowing the rear yards to be built upon for modern apartment units and the existing Georgian houses to be tastefully converted to apartments appropriate to the form of the existing building. An example of such a Georgian house conversion and new build exists on a scheme completed 5 years ago on lower Mount Street.

The driving force for this new use as multifamily unit conversion could be market demand for city living, coupled with an enhanced capital allowance incentive for developers to take on the risk of purchasing vacant or semi vacant Georgian Houses and converting them to multifamily use. From a town planning perspective this has to be a positive planning gain for the city.

This would mean having the Georgian houses, pavements, parks and streets used for the original design intent. Thereby apartments we can provide modern active living city by way of residential use in the evening and weekends rather than the current scenario where these empty museum type properties lay under utilised and vacant from 5pm most evenings and for the entire weekend.